North Walsham mayor Barry Hester’s year of civic fundraising for the Friends has topped the £1500 mark.

The sum was announced by Mr Hester at a civic dinner marking the centenaries of the First World War Armistice and the formation of the Royal Air Force.

He praised the community spirit which existed in North Walsham thanks to people organising events ranging from fireworks to cinema on the park, manning a new visitor centre and Matt Smith and North Walsham Play raising £150,000 for two new play parks.

The £1500 – so far – for the Friends was reached after four and a half months, boosted by a recent pool marathon held under the town clock. 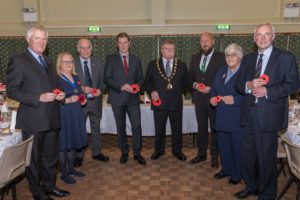 In a powerful speech which earned a standing ovation Friesenried Burgermeister Bernhard Huber said war was not about “guilt or innocence, winners or losers, right or wrong, or good or bad,” but about “millions of victims.”

The soldiers from both sides were “just normal people” involved in “useless fights” and regarded as worthless by the politicians.

The deaths were “not heroism, just manslaughter” and the victims would “rather be alive than heroes.”

And he warned against the modern day rising tide of nationalism which “more and more people seem to think is the cure for all problems, adding: “We can all see where extreme nationalism leads to” in a world where hate seemed more powerful than love.

There were also speeches from Royal British Legion branch chairman Colin Chambers, and county Legion president Sir William Cubitt, along with history re-enactor Neil Storey who recounted tales of local men who fought in the Great War, and urged people to “remember them but move on.”