The 179 men from the North Walsham area who gave their lives in the First World War were honoured at an Armistice Day ceremony outside the hospital built in their memory.

The original War Memorial Hospital was opened in 1923 following a public fund-raising appeal. It salutes the 99 soldiers from the town and 80 from surrounding villages who made the ultimate sacrifice fighting for their country.

A memorial stone from the building still proudly stands at entrance to the current building which replaced it, and is the focus of an annual ceremony on November 11.

Veterans, hospital staff and supporters and members of the public gathered for the two minutes’ silence.

Hospital supporters have turned land workers to give a wild flower meadow a winter makeover.

The area in front of North Walsham War Memorial Hospital has been mown, and is now being raked, by members of its Friends group.

Next they plan to tidy up pathways where wooden edgings and anti-weed mat have rotted.

The meadow was created by the Friends, with help from local businessman Carl Bird in memory of his mum Madge, in 2012 on the site of the former hospital when it was replaced by the current building.

Friends chairman Keith Jarvis said: “Ten years on, the meadow is in need of a bit of tender loving care, so we have given it a good haircut and rake through to help the flowers come back stronger next year.

“We will also remove crumbling edges and torn matting which have become a trip hazard.

“There are not many of us, so we are trying to enlist help from other organisations who might be able to join work parties in the coming weeks.”

Anyone willing to help should contact Keith at k.jarvis155@btinternet.com. 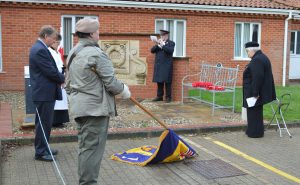 Find out more about the Friends, our work, and how to donate or get involved by exploring this website.

A piece of North Walsham hospital history has been saved as a garden feature thanks to the Friends group.

A window and cross from the old 1929 chapel were rescued when it was demolished earlier this year due to its deteriorating condition.

Now they have been mounted in a brick memorial in the hospital garden as a reminder of the community hospital’s heritage – and as a talking point for patients, visitors and staff enjoying the grounds.

Friends chairman Keith Jarvis said: “We were initially concerned when the old chapel on the entrance road was earmarked for demolition, as it was the last remaining piece of the original hospital built in the 1920s.

“But the authorities kindly saved the window and cross when we asked, and we are pleased to give them a new life in the garden which is currently getting a makeover thanks to volunteers.

“We hope people appreciate it as attractive feature which also reminds people about the site’s long and proud history of community care.”

He thanked tradesmen John Easton and Kelly Yaxley along with Daniels Aggregates and Travis Perkins’ North Walsham branch for donations of labour and building materials which reduced the cost of the project.

The garden memorial was funded and organised by the Friends, who use public donations to provide “extras” to improve the quality of life for patients, staff and visitors.

The Friends have also funded bird feeders for the garden, where they have also supported the volunteer team with gardening materials and equipment.

A new group is giving spare time to prune, weed and generally tidy the grounds of the War Memorial Hospital off Yarmouth Road.

They are keen to recruit more helpers, and are using tools and gardening materials bought by the hospital Friends group.

This week the gardening gang launched into action smartening up the beds around the patio area, where patients, visitors and staff sit to relax.

Hospital Friends chairman Keith Jarvis said: “We are delighted to see the volunteers working on the garden, where we are also funding new benches and picnic tables. The gardens are a lovely place to sit away from the ward, and where staff can enjoy a well-earned break outside.”

The Friends have bought wheelbarrows and compost for the helpers, who are a mix of local people and Aviva co-workers carrying out a corporate community project. The Norfolk Community and Health Care Trust, which runs the North Walsham unit, has also bought garden tools from its charity fund to help the project.

Volunteer co-ordinator Wendy Bryant explained: “We were all set up to launch this in April – then lockdown happened. So now we are getting the group off the ground for the first time, and they are already making a difference.”

She appealed for any other keen gardeners to join the hospital team. They can either drop in on their own, or work with volunteer colleagues. Anyone interested should contact wendy.bryant@nchc.nhs.uk

It’s been seven months – but the Friends committee is back in face-to-face action.

We have held our first meeting since early November and are raring to go with lots of ideas to improve life for the hospital’s patients, staff and visitors.

Not that we have been idle during our half year in lockdown. We have been keeping in contact via phone and Zoom, and kept up our support through schemes as diverse as goodie parcels for the hard-working staff to an uplifting mural outside one of the wards.

We are now looking into upgrading the garden furniture to help people enjoy sitting in the grounds either as visitors or staff taking a well-earned break.

Also on our agenda is improving the Wild Flower Meadow on the left hand side of the driveway, resurrecting plans for a visitors’ overnight room that was put on ice during the pandemic, and talking to health trust chiefs about how best to spend a family legacy. 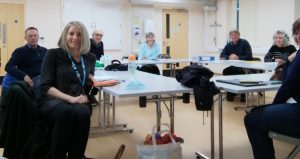 It was good to welcome to our meeting Carol Plunkett the charity development and project manager for the Norfolk Community Health and Care NHS Trust, and we look forward to working with her. She was even greeted by a family of small deer in the grounds!

We will update you on our projects on this page in the coming months. For more information on the work of the Friends, and to find out how you can support us, please click here.