North Walsham’s War Memorial Hospital was the fitting venue for the first of the town’s five services marking the centenary of Armistice Day.

Hospital Friends were joined by  the Royal British Legion, Army and Air Training Corps cadets, councillors including the mayor Barry Hester, hospital staff and supporters for a 9.30am service and wreath-laying led by the vicar the Rev Paul Cubitt.

Paul Watts from the Cromer and Sheringham Band was the bugler.

The original hospital was built in 1924 in memory of the 99 men who lost their lives in the Great War.

Also on display was a replica Red Cross fIag as a reminder of the two auxiliary hospitals which were set up temporarily in the town to nurse injured soldiers from the 1914-18 conflict. Two flags have been recreated, to go on display at the hospital and church, through a joint initiative this year by the Friends and the vicar. 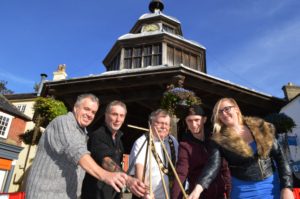 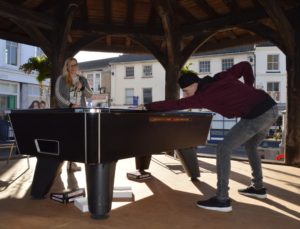 You might think being a mayor is just about wearing a chain and chairing council meetings, but think again.

North Walsham Mayor Barry Hester is proving to be an action man having chosen the Friends as his civic charity this year. 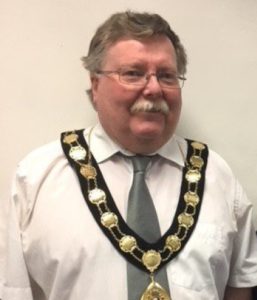 North Walsham Mayor Barry Hester who is supporting the Friends during his civic year. Picture courtesy North Walsham Town Council.He will be up at 7am on Sunday morning (July 15th) to help man a tombola stall for us at the car boot sale in the town market place, running from nine until noon.

He said: “I am also a trustee for North Walsham Play which is raising funds for play equipment, who are also running a stall. So I thought @if I am going to be up at that time I might as well run a tombola for the Friends too!”

A collection at his civic service has already netted more than £350 for the Friends, and we are grateful for all the events that will boost that figure this year.

Thanks Barry and if people are out and about on Sunday morning do drop into the sale and buy a tombola ticket.

The Friends’ recent involvement with replica flags for North Walsham’s Red Cross Hospitals from the First World War has prompted a lot of interest.

They include Friends supporter Mary Seward whose ancestry research has given us a few brief snapshots into the people who worked there.

There were 3000 Voluntary Aid Detachment (VAD) hospitals – temporary units set up in locations varying from town halls and schools to private houses.

North Walsham had two on the Mundesley Road at Wellingtonia (still a residence) and Lower House (now redeveloped as Greenway Close).

The government paid £1 4 shillings and sixpence a week, or £63 a year, to cover hospital treatment, food and other costs.

The auxiliary hospitals were manned by a mix of volunteers and paid staff headed by a commandant  (a kind of chief executive), a matron directing nursing staff, quartermaster dealing with provision and local VAD members trained in first aid and home nursing.

Local members of the medical profession did a large amount of voluntary work in these hospitals. In 1917 the War Office decided that some payment should be given to doctors providing help.

Local women from the neighbourhood volunteered part-time, although it was often necessary to supplement voluntary work with some paid roles, such as cooks.

Auxiliary hospitals also drew on members who were too old or young for work in a military hospital. Many were unable to leave home for six months due to family commitments, but were willing to sign a three-month hospital contract.

Famous volunteers included superstar singer Clara Butt and author Agatha Christie – who has other links with North Walsham, staying at what is now the Beechwood Hotel. Agatha helped at the VAD Hospital in Torquay.

Among those listed as working at North Walsham were:

Edith Wilkinson Carter – Acting commandant at Wellingtonia in January 1915. A note says it had 15 beds and handled 475 patients before it closed on January 21 1919. She was awarded the Royal Red Cross in 1918, which was presented by the King. Edith was born in May 1865, and died aged 90 in 1996. Husband Cecil was a doctor.

Christiane Maud Davies – a cook at the hospital in 1915-16 as a Red Cross Volunteer. Born March 1883 in Wakefield and died 1963 in North Walsham. Her sister Madeline was also in general service at the hospital.

Constance Empson – born in North Walsham in 1872, the daughter of local solicitor William Empson. Records show she clocked up 2360 hours of service. She was a member of the well- known Walker family who co-ran Ebridge Mill with the Cubitts. Constance died in December 1928 aged 57. Her granddaughter Celia Scott recently made a donation to the hospital friends in recognition of her connections – and the family still has the treasured heirloom of an engraved topaz brooch thanking her for her hospital work.

Ellen May Howes – who worked in a “general surgical, eyes and mess” and earned £20 a year for her labours. Born 1891 and died 1983. She lived in Dublin, France and The Rookery at North Walsham.

Mary Wiles – a head teacher an elementary school who did general nursing duties between April and September 1917. She lived in Lime Tree Road.

Mildred Emmeline Wool – a Lancashire lass, who was a nurse at the hospital from 1918-19 and died in the town’s cottage hospital in July 1950.

Other Red Cross volunteers lived in town but worked elsewhere. They included:

Florence Wilkinson – who lived at The Oaks and is listed as quartermaster at the Palace in Peterborough, and Institute in Lyghe in Kent. Her duties included “nursing, secretarial and quartermaster” tasks including meeting ambulance trains at Peterborough station.

The Friends have got a new friend in a high place – recently- appointed North Walsham Mayor Barry Hester.

He has kindly made us his charity of the year, and has pledged to raise hundreds of pounds during his time in office.

Mr Hester, 60, was mayor two years ago, when he raised £1900, which was split between the local dementia support group – in memory of his mother who lived with the condition – and the parish church First World War window restoration appeal.

After donning the chain once more, the retired civil servant has chosen the Friends to benefit from civic and town council charity events this year.

They will include the civic dinner, Christmas markets, market stalls and tombolas as well as other events he will be discussing soon with fellow councillors and the Friends.

Mr Hester, who lives in Corbett Road, North Walsham, said: “I was looking for a good cause to support and it did not take long to choose the hospital Friends.

“I attended the opening of the hospital’s training suite they provided during my last term of office, and am keen to help them carry on their good work.”

Friends chairman Keith Jarvis said: “We are thrilled to have the support of the mayor. Not only will it bring us more funds to help the hospital and its patients, but it will help raise awareness of who we are and what we do.”

The Friends are currently in talks with the health authorities over plans to improve the hospital day centre and garden patio for the benefit of patients and visiting relatives.