A former nurse who cared for thousands of patients in a 40-year career before retiring at North Walsham hospital has died aged 79.

Marie Young, who lived on Happisburgh Road, rose to become a theatre nurse, ward sister, nursing officer and at one time specialised in training, at hospitals in Sheffield, Birmingham and Market Bosworth.

When she and civil engineer husband Mike moved to North Walsham Marie worked as a part-time staff nurse mainly on night shifts.

Outside of work she was a talented musician playing piano, semi-professionally, for a dance school in Market Bosworth in the evenings, having finished her shift at the hospital.

When she was younger she also played the cello, and in Norfolk she enjoyed singing with the North Norfolk Chorale.

Daughter Nicola said: “Wherever she worked, people remember her for being a real livewire, sitting at the piano and leading the carol singing.”

She was a forthright Yorkshirewoman who worked really hard – baking bread in the morning, cycling to work, then going straight to the dance school in the evenings.

Marie, who also has a son Simon, a railway signalling manager, suffered poor health in recent years and was bedbound.

She caught Covid twice over the winter during spells in hospitals and battled back but sadly died from pneumonia in Heron Lodge care home at Wroxham on August 7.

Her funeral was held at North Walsham parish church on August 18, attended by some former colleagues from the war memorial hospital.

Nicola added: “Even when she was in hospital and care homes herself, she was still training the nurses and the carers – giving them advice on how to turn her over in bed.”

She thanked the staff who turned out for the funeral, where donations of more than £100 were made to the Hospital Friends.

The last bit of “old hospital” is about to disappear in the coming weeks – with the demolition of the redundant mortuary, generator room and garage on the driveway into the unit.

But the Friends are working with officials and contractors to save the cross and a stained glass building that hark back to the original hospital’s opening in 1924.

The aim is to incorporate them into a feature somewhere in the grounds. 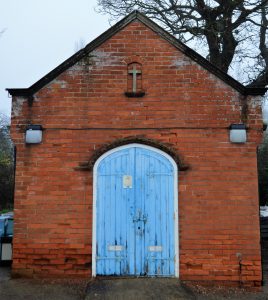 All three buildings have been without power and services since the old hospital was demolished in 2011, and have fallen into disrepair with crumbling brickwork and failing roofs.

The hospital authorities say the buildings contain asbestos. So, as they deteriorate, there is a danger of collapse and asbestos becoming exposed to the public.

The options were either to repair – which was financial unviable because of no modern day use – or to demolish, which was given planning permission in December with no objection from the town council.

Work clearing the asbestos will happen this week, followed by demolition which should take another two weeks.

The Norfolk Community Health and Care NHS Trust which runs the hospital has longer term plans to use the sites for extra space for the community nursing and social services teams – but the project is not currently in any future spending programme.

The Friends are aware of public concern about the loss of the buildings which have been posted on social media.

Friends chairman Keith Jarvis said: “Of course it is sad to see historic buildings go, which is why we have asked for the cross and window to be saved. But we also have to look to the future and providing facilities for the hospital’s modern day roles and patients. “

The town’s outgoing mayor Barry Hester made the town’s hospital Friends his civic charity of the year.

And after a successful series of events he has handed over £4221.02 – more than twice the £2000 target he set himself for his year of office, which ended in May.

The fund was boosted by donations and money-raising events from across the community, and Mr Hester said “a lot of people were happy to help because they want to support the hospital.”

Events included cinema and fireworks on the park, a 24-hour pools marathon, bike and trike weekend, civic dinner, donated shoes sold on market stalls and in the Kitale charity shop, and a comedy night which starred TV funnyman Hal Cruttenden.

Mr Hester handed the cash over to Friends chairman Keith Jarvis at the North Walsham War Memorial Hospital, thanking everyone who helped stage and man events.

In his previous stint as mayor in 2016 he raised £1900, split between the North Walsham Dementia Support Group and the World War One window restoration in the parish church. This time he was pleased to help the Friends with their work in providing extras for the popular community hospital.

Friends chairman Keith Jarvis praised Mr Hester and those who contributed to the appeal, and said the committee was looking into a specific project for civic cash.

Recent Friends projects have included a £22,000 day room refurbishment, and ongoing improvements to the garden.

The next Friends’ next fundraiser is a Music for a Summer’s Evening concert of popular organ classics played by Jon Payne in the parish church on Saturday 20th July at 7.30pm. Tickets £8 (£5 concessions) on 07540440122 or http://www.northwalsham.eventbrite.co.uk

The trike and bike weekend, organised by White Swan publican Pete Edge, is being held again in aid of the hospital Friends next Easter.

Patients on the wards at North Walsham War Memorial Hospital have been given some Christmas cheer by its League of Friends.

Each of them received a gift bag brimming with 15 items from socks and stationery to toiletries and cheese biscuits – topped by a Christmas cracker.

Friends members toured the hospital on Saturday to deliver the parcels.

The presents, are one of the “extras” provided by the Friends – who rely on public donations for their funding – to improve the lives of patients and families. Staff were also given food hampers in appreciation of their work.

Chairman Keith Jarvis said: “This is one of the highlights of our year. Staff say patients are so grateful that people are thinking of them. It is so rewarding to see the patients’ smiles at a time of year that is all about caring.”

Staff sang “We Wish You a Merry Christmas” to Friends after receiving their gifts, then headed back to work on the wards.